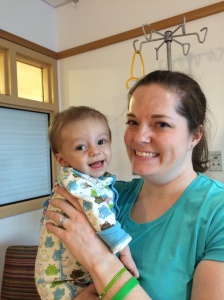 When my husband and I welcomed our first child, Elias, 5 weeks early, we were terrified. He was a strong 6 pounds and despite developing jaundice, he was healthy. We took him home a few days later and tried to navigate being first time parents. We went every couple days to have his lab work monitored in our hometown of Columbus, Ohio. As he approached a month old though, the jaundice was getting worse, not better. When he was 5 weeks old, he was diagnosed with the rare liver disease, biliary atresia. When Elias was 7.5 weeks old, he underwent surgery to have a procedure done called a Kasai to create a passageway for the bile. The surgery went well and we tried to settle into life with a newborn. We knew the statistics were against us, with a very high percentage of biliary atresia patients needing liver transplants before they reach kindergarten. We tried to stay focused on living each day at a time.

On December 31, 2013, Elias came down with a fever. That one fever kicked off a scary, traumatizing three months. We spent more days in the hospital than at home. We knew we needed the best. At the end of January, Elias was flown from Columbus to Pittsburgh. He was evaluated by doctors at Children’s Hospital of Pittsburgh of UPMC and was added to the national liver transplant list. That began the longest wait of our lives. Elias was stable enough to return home to Columbus after his evaluation, but we still were in and out of the hospital.

By mid-February, Elias was in acute liver failure which was causing other life threatening complications.  He was a sickly shade of yellow. His skin sagged over his bones as he lost more and more weight yet his abdomen grew more and more distended. We were running out of time. His priority on the transplant list was elevated, but due to his small size, just 12 pounds at the time and rare blood type, we continued to wait while his health deteriorated. There simply were not enough registered donors that matched his needs.

Quietly in the background though, a gift was in the works. My husband’s cousin drove 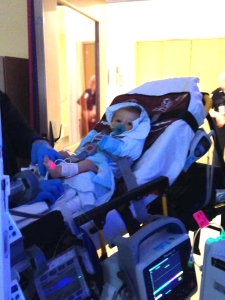 from Ft. Wayne, Indiana to Pittsburgh to be evaluated to be a living donor. He was a match! Surgery was scheduled for a few days later. We planned to drive to Pittsburgh, but Elias has never been one to follow a plan. We ended up back at the hospital in Columbus in the intensive care unit. They worked quickly to get the helicopter ready so we could take yet another trip to Pittsburgh. A few days later, on February 26, 2014, when Elias was 7 months old, our hero, Zac, donated a portion of his liver to our sweet Elias. The lead transplant surgeon was Kyle Soltys, M.D., with help from the transplant team of George Mazariegos, M.D., Rakesh Sindhi, M.D., and Geoffrey Bond, M.D., all within the Hillman Center for Pediatric Transplantation at Children’s.

Within 24 hours, Elias’s skin was pink and pale, as it should be! The whites of his eyes were actually white, a shade we had never seen on him before. Zac gave our son the gift of life and gave our family hope. None of that would have been possible without the skilled surgeons, doctors, nurses and everyone else at Children’s Hospital of Pittsburgh of UPMC that made this transplant a reality.

We spent two weeks in the hospital after the transplant and were then discharged to stay at the Ronald McDonald House until his transplant team felt he was stable enough to return to Columbus. We spent a total of 47 days in Pittsburgh for transplant and recovery. During that time, the staff at Children’s Hospital didn’t just take amazing care of Elias, they took care of our entire family. 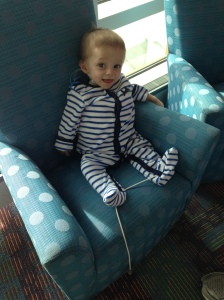 In the hours after the transplant, Elias was trying to fight through all the sedation. He was trying to roll over and pull out his breathing tube and drains. It was gut-wrenching to watch. But one very kind nurse in the Pediatric Intensive Care Unit sat down with me and my husband and carefully explained everything that was happening and reassured us that Elias was ok. I will never forget how kind he was.  And we want to give thanks to all of the nurses on the transplant unit. It was so comforting to know that the team of nurses understood liver disease and transplants. They are so skilled and experienced, yet incredibly compassionate. They treated Elias like he was their own. They celebrated the smallest of milestones, the first post-surgery bowel movement, to the biggest, which was normal liver function!

The Child Life Department was also a huge help during our time at Children’s. The team on the transplant unit was amazing. They understood our son’s age and limitations and brought him toys and bubbles that engaged and distracted him. They brought him mobiles for his crib, toys to play with, even a walker so he could sit up and check out the happenings at the nurses’ station and the sun room.

By far the most wonderful thing they did for Elias was enroll him in the Beads of Courage® program. Elias won’t remember the trauma of the first year and a half of his life, but through his beads, we will be able to share his story with him. But the beads aren’t just for him. They are for me and my husband and our families. All of us earned those beads too. We were with Elias for all of it. Child Life made it possible to turn a scary and terrible time in our lives into something beautiful! We have nearly 6 full necklaces of beads that are beautiful and empowering. We made it through all of that and will make it through whatever life has for us.

We returned to Children’s in October of last year for Elias’s abdominal wall closure surgery. It was a painful recovery for him and we had a new set of challenges caring for a toddler in the hospital instead of an infant, but once again, the hospital staff was amazing at helping us navigate those challenges. I think they were also happy to see Elias and how well he was doing post-transplant. They have been on this journey with us. 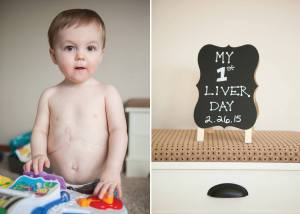 to go through what he did, I am thankful we had the support of Children’s to make it a little easier. Elias is now a wild, happy, active 20 month old. You would never know that we came within days of losing him. The beautifully heartbreaking thing about it all is that he has no idea what he’s been through. He’s a fighter, yet he doesn’t know any different. And for that, I am thankful as we navigate a post-transplant, immunosuppressed world.

We are so thankful for Children’s Hospital of Pittsburgh of UPMC and the amazing people who have been a part of our journey. Thank you!  Without you, we wouldn’t have a sweet, thriving toddler to chase after!

Patient outcomes and experiences shared in this blog by families are not intended as typical or representative cases. Every family’s story is unique.